On November 8, following Superstorm Sandy, I was privileged to participate with one of the early Mennonite Disaster Service (MDS) teams to Staten Island.  There amidst the front end loaders lifting wet debris from the streets into dump trucks, we encountered a busy community of local people and volunteers like us attempting to be helpful.  One thing became immediately clear.  MDS and Mennonites did not have a corner on compassion and care.

Along the street in front of the Oasis Christian Center building, men worked over a grill preparing chicken for anyone, including us, to eat for lunch.  The church (with partial Mennonite roots) had moved their worship to another setting to make the building available as a center of distribution for clothes and food.  In the background we heard the purr of generators providing power for the activities going on in the church.  Beside the church, at a makeshift table under a canopy, two people gave direction to the many people milling about who were seeking to be helpful.

Located only a few blocks from the bay, this church, like all the homes in the area, was vulnerable when the high tide and storm surge came roaring down the street.  Across the front of the church a distinct waterline indicated the height of the water during the storm—about neck high for an average-sized adult.  Basements and the first floor of homes throughout the neighborhood had been flooded.  Near to the church were several homes where the residents had drowned.

Inside the church, we sorted clothes and food donated for those in need.  “Do you have any hooded sweat shirts?” someone inquired.  Such a request was not hard to understand on this cold November day. 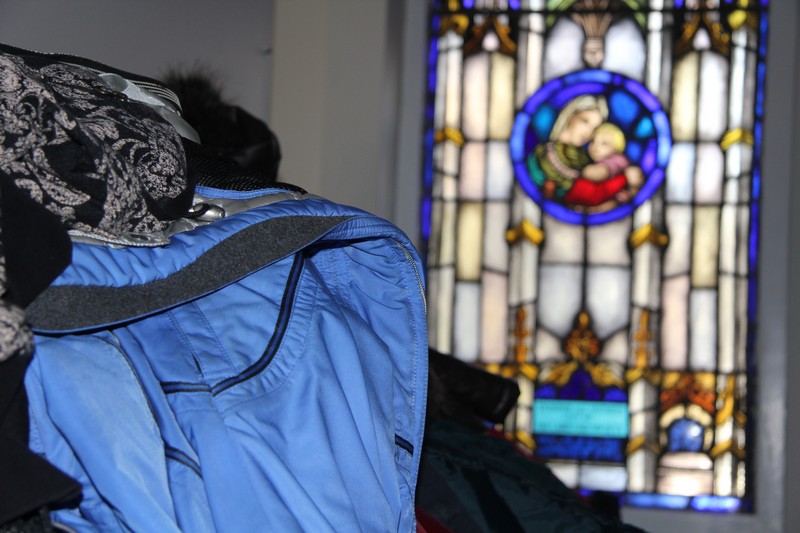 “We lost everything,” a woman reported through tears, with deep gratitude for jackets to wear.

Toiletries, clothes, and food of every kind appeared.  Twice during the day a U-Haul truck pulled up to the curb with contributions gathered around the city for distribution.  Others in our group worked at restoring electrical systems destroyed by the water, or in removing drywall so that the interior of the walls could dry without mildew.

The residents of this Staten Island community have lived near the water all of their lives.  Never has anything of this sort happened before.  How quickly the fury of the storm shattered the lives of these otherwise stable middle-class families!  It was hard for them and for me to make sense of such devastation.   I could almost hear in the background the taunting voices the Psalmist experienced in the wake of such a personal tragedy: “Now where is your God?”  (Psalm 42:3)

About dark we began our journey back to Lansdale, Pa., and to the safety of our homes. The team was united in gratitude for being able to participate in such a day of service to others.  But beneath the reward of having been privileged to serve, I sensed an unspoken sober awareness of the fragility of life, and the reality that natural disasters such as we witnessed were seemingly becoming more frequent.  At least that is what some of our public figures suggest.  What might that mean for our nation, for us?  That question, plus the inexplicable destruction we had just witnessed in this Staten Island community remained for us to ponder as we returned home that evening.

Jim Lapp is a retired Franconia Conference pastor who has served broadly in congregational, conference and denominational roles.   He and his wife Mim Book have returned to Southeastern Pennsylvania this fall after serving in an interim pastoral role in Nebraska.

Individuals and teams from many Franconia Conference congregations have served with Mennonite Disaster Service since Superstorm Sandy, including Salford, Plains, Philadelphia Praise Center, Doylestown, Salem, Blooming Glen, and Ambler.  If you have served in this way and have reflections to share, email your thoughts to Emily.